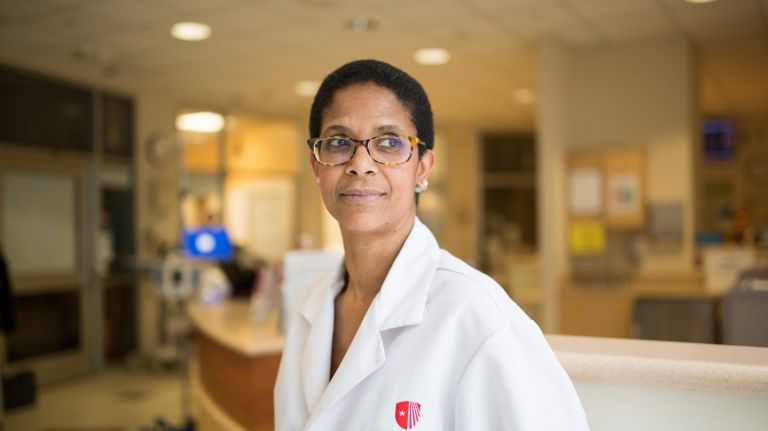 Dr. Allison McLarty knew as a 10-year-old she wanted to become a physician and confirmed that decision after a childhood accident landed her in a hospital, an environment she found fascinating. She grew up to become a leading Long Island cardiothoracic surgeon. Large parts of her story — nearly chapter and verse — are shared by a growing list of Long Island women who are breaking barriers in medicine as well.

“I wound up in cardiothoracic surgery because I fell in love with it,” said McLarty, who heads thoracic aortic surgery at the Stony Brook Heart Institute, a division of Stony Brook University Hospital, where she also is co-director of the ventricular assist device program. She told a recent Black History Month gathering at Stony Brook University that she was discouraged from seeking a career in surgery by a fellow medical student at Columbia University’s College of Physicians and Surgeons, who said, “As a black woman, you can’t be a surgeon.” McLarty persisted — and succeeded — becoming one of a small number of women practicing cardiothoracic surgery in the United States. “There aren’t a lot of women in cardiothoracic surgery, period. There is a sea of thousands of men,” McLarty said.

She is the first black woman to practice as a cardiothoracic surgeon on Long Island. She still marvels at the new lease on life the system known as a left ventricular assist device — an LVAD — provides for desperately sick heart patients. She has seen many in heart failure rebound with a pump that forces oxygenated blood through their bodies. “When I went to medical school I was enthralled with surgery, and when I reached my second year as a surgical resident at Columbia University, I was certain. It was in the days when we worked very hard, 26 to 30 hours at a pop,” she said of the 1990s. “I would see these patients who would come in so very sick and in a week they were going home. It was like magic. It is still like magic,” she said.

McLarty, originally from Jamaica, came to the United States after high school. She majored in chemistry at Swarthmore College in Pennsylvania. The divorced mother of two isn’t surprised that her children — a daughter and a son — are uninterested in medicine, given the demands on time and family life. Her daughter, a student at Brown University, hopes to become a journalist; her son, who’s still in high school, wants to be a pilot.