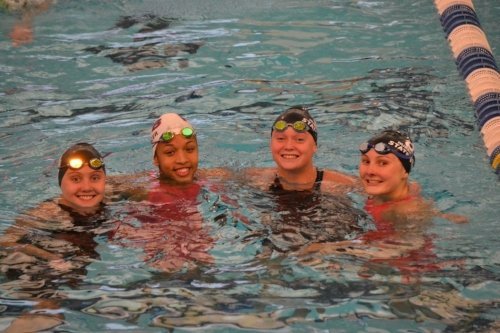 In her first time competing at nationals, 16-year-old Hannah Spencer, of Centerport, set the freestyle record for Huntington YMCA swim team at the 2017 YMCA Short Course Nationals, which were held in April.

Spencer competed April 6-7 at Greensboro Aquatic Center in Greensboro, North Carolina and finished the 50-yard freestyle race with a time of 24.48 seconds, setting a record for the Bluefishes. She also time trialed the 100-yard freestyle and swam a time of 53.48 seconds. This qualified her for nationals in both of these events for next season.

“I was extremely excited to set this record because it has been a goal of mine ever since I moved into the 15-19 age group,” Spencer, a junior at Harborfields High School, said. “It motivated me to keep working hard.

“These intense practices reached a peak about 10 days out of our State meet,” she added. “Then we tapered off and focused more on the technical aspects of swimming like starts, turns, breakouts, and finishes.”

Since Spencer was the only one from the team competing at nationals, practices were more geared towards just 50- and 100-yard freestyle, where she built up her endurance and maximum speed capability.

Spencer added, “We also spend a lot of time working on my flip turns and kick outs which had been my weakness in the past, but ended up being the reason why I swam so well at nationals and dropped time in my 100 freestyle.

Having qualified for 2018 nationals, Spencer said, she is looking to improve her times for next year.

Spencer has been a member of the Huntington YMCA Bluefish team for nine years. She is also currently on the Harborfields swim team and participates in orchestra, chamber orchestra, National Honor Society, Athletes Helping Athletes, and Habitat for Humanity.

Swimming for 10 years, Spencer said, she enjoys the unpredictability of the sport.

“You can go into a meet seeded 30th, thinking that there is no way you can improve your placing, and then you can drop just a tenth of a second and find yourself in the top 16 competing at finals because other swimmers didn’t perform their best,” Spencer said. “I love the fact that there is no real set ranking at the age group level because it allows you to get excited for every race and do something you originally didn’t think was very feasible.”

Chartered in July 1962, the Suffolk County Chapter of Jack and Jill of America, Inc. is a membership organization of mothers with children ages 2 – 19, dedicated to nurturing future African American leaders by strengthening children through leadership development, volunteer service, philanthropic giving and civic duty.